There’s still time to sign up and find out more about one of the fastest-growing areas of software expertise in the world of VFX.
SideFX Houdini is an increasingly useful digital tool that allows users to create FX work such as smoke, fire and water with much less difficulty than with traditional software packages.
Free Houdini Tutorials

Mark Spevick, our Head of Industry Training (and in-house Houdini expert) has created a series of free tutorials in Houdini, hosted at the official SideFX website.

Mark Spevick
Mark Spevick is one of our most experienced tutors at Escape Studios.Mark is our Head of 3D, and also Head of Industry Training, and combines teaching with working in industry, most recently at Framestore. You can find Mark’s extensive movie credits at the IMDB. 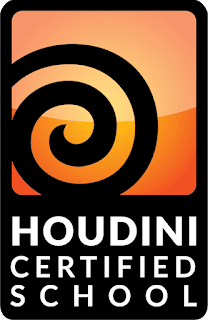 This latest partnership comes after our recent official certification by Epic Games as an Unreal Engine Authorised Training Centre (ATC).
Mark Spevick Houdini Tutorials
There are currently five Houdini Tutorials at the SideFX site:
The Escape Studios VFX Blog offers a personal view on the art of visual effects.