Meet the 2D VFX Team at Escape Studios. 2D VFX is all about compositing, and is primarily taught in Nuke, by The Foundry.  Our graduates in 2D Compositing have enjoyed spectacular success in recent years, with almost 100% of our students finding work in their chosen field.  Below are the talented tutors who teach the art and craft of 2D VFX at Escape Studios, helping to ensure we remain the UK’s leading centre for the study of VFX.

Klaudija has over 20 years experience on commercials, broadcast TV and feature films.  Klaudija has worked at most of the major post-production houses in London including MPC, Mill, Millfilm, Framestore, Double Negative and Glassworks.

Sokratis Synitos has many years of experience in compositing for both film and TV, and teaches the Art of Compositing to our Short Course and MA students.

Sokratis has worked on projects at studios such as DNEG, Cinesite and Warner Bros.  Sokratis has degrees in computer engineering and also in film studies. He is also a graduate of the 12 weeks compositing VFX program of Escape Studios.

Sokratis has worked on many major films including: Spectre, Avengers: Endgame as well as episodes of Black Mirror, Altered Carbon and Dr. Who. You can find Sokratis here at the IMDB.

Clement Gharini started 20 years ago as a cameraman on productions such as Harry Potter and Mission Impossible.  Clement then turned to Visual Effects and became a Digital Compositor for 10 years, contributing to productions such as Game of Thrones, Doctor Who as well as Oscar winning Ex Machina.   Clem also specialises in virtual production, creating photo realistic digital humans.
Clement teaches cinematography to our first year undergraduate students, in which students get experience with live action cameras. He also teaches compositing to our 3rd year VFX students, and runs the motion capture pipeline at Escape Studios.
Lorenzo Mannicia – Teaches First Year Undergraduates 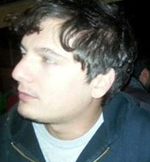 Lorenzo Mannicia is an experienced 2D VFX artist with skills in compositing and also matte painting.  Lorenzo has also worked as a localiser of open source educational software (So.Di.Linux) for students. A number of projects have involved the translation of operative guides specifically arranged for young students.

We have many online resources to support our students’ learning. You can see many tutorials in compositing in Nuke here at the Vimeo Tutorial Channel.  To find them, scroll down to the bottom of the page.