Many congratulations to the makers of “Little Gestures”, which has won the Best Cine-VFX award in the Global University Film Awards (GUFA) 2022, with a cash prize of $10,000.

This is the latest award for “Little Gestures”, a short story about an artist’s maquette which comes to life.
The film was directed by Richard O’Hanlon and Daniel Brand-Sinyinza, and produced by Nickoel Izharudin and Dominic Strachan.
Little Gestures – Official Vimeo Showcase

“Little Gestures” was directed by Richard O’Hanlon and Daniel Brand-Sinyinza, and produced by Nickoel Izharudin and Dominic Strachan.

In PR6001 our animation students and VFX students combine forces to produce a short film combining live action and animation, shooting live action plates and then integrating these with animation, tracking the assets to create a seamless composite. 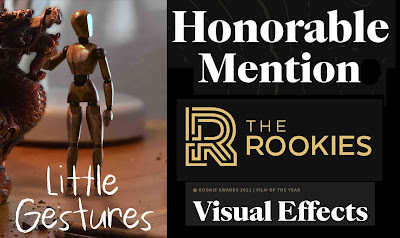 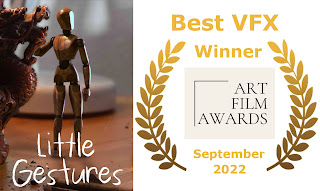 Little Gestures at the IMDB

You can find Little Gestures at the IMDB here.