AI is coming, and it’s time for everyone in the creative industries, including our students at Escape Studios, to get ready for the changes to come.

AI represents the biggest technical advance in the VFX industry since dogital tools began to replace traditional hand-animated feature films in the early 2000s.  Artificial Intelligence is here; the question is – how do we make the best use of it?

How Will AI Transform the Animation Industry?

AI is transforming the animation industry by making it faster, more efficient, and more cost-effective.  AI -based tools can automate tasks such as character rigging and animation, reducing the time and resources spent on manual tasks.  AI can also help create more realistic visuals, using techniques such as facial recognition, motion capture, and facial expressions tracking.  AI can even be used to generate entire scenes or movies, allowing for faster and more creative storytelling.

At least, that’s what AI says.  The paragraph above wasn’t written by me, it was written by the AI bot at Open AI, which allows users to enter a few word prompts, and generate original content. In this case, the keywords were “How will AI change the animation industry?”
Using AI at Escape Studios
How can we use AI at Escape Studios?  We can use it for many things, including image generation, saving time and energy in the design and styling of an animated film.  Concept art can now be done quickly and cheaply using the AI bots.  For our group projects, especially those with short schedules, this can make a huge difference in the delivery of a successful film.
Ideation & Creativity 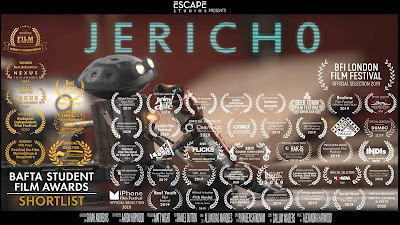 AI can also be used to write simple stories, and generate names for characters.  For example, take the BAFTA-shortlisted short film Jerich0, made a couple of years ago at Escape Studios by VFX and animation students collaborating together.  Let’s say we want to create a name for the two robot characters in the film.  One is a lizard, the other is a friendly hand-made robot.  Let’s ask Open AI for some ideas, by typing in the some key words such as “friendly lizard handmade robot” into the AI Playground.

We get: “Tikki the Lizard Bot”, “Friendly Bot”. “Cheery Bot”, “Rusty Buddy”, “Rambling Rusty”, “Befuddle Bot” – among other ideas.   Not brilliant yet, but a good starting place for idea generation.
Monday 16th January – AI and Ideation and Escape Studios

On Monday 16 January 2023 I’ll be teaching a class at Escape Studios in the use of AI to create ideas for our short film project, beginning in February 2023.  Our students often struggle to come up with original material and stories for films; AI can be useful in helping to overcome writer’s block, and encourage the iteration of fresh ideas.