Escape Studios is proud to present “iCare“, the latest short film created by our third year animation and vfx students at Escape Studios.  Directed by Bruno Urzi and produced by Alex Sellen,  iCare was a collaboration between undergraduate animation and vfx students, working together to create an original story.  Studio projects such as this one are part of what we call The Escape Method – bringing together students with multiple talents to work in teams and produce an industry-quality outcome. 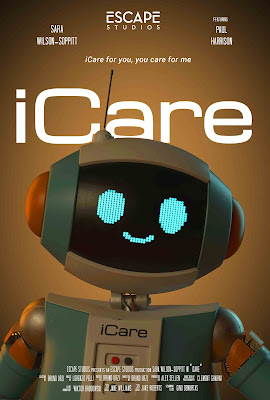 iCare tells the story of a care robot who looks after an elderly woman, played by Sara Wilson-Soppitt.  The short was directed by Bruno Urzi and produced by Alex Sellen.

iCare was animated in Maya, rendered in Arnold, and edited in DaVinci Resolve. Meshroom was used for for photogrammetry.