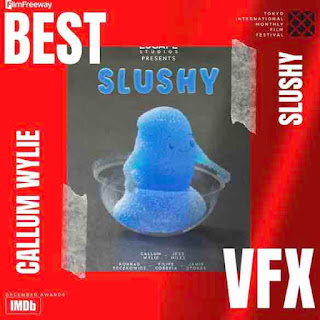 Congratulations to the creators of “Slushy”, which has won Best VFX at the Tokyo International Film Festival (TIMFF).

Directed by Callum Wylie and produced by Jess Hiles, “Slushy” is a short animated film about two frozen soft drinks who get separated and have to find a way back to their fridge-freezer home.
Slushy was created as part of a Studio Project in which animation and vfx students join forces to create a short film.
Slushy has won multiple festival awards.
“Slushy”

“Slushy” is a short animated film created by a team of animators and VFX artists at Escape Studios over three months, part of the third year animation Module PR6001, a Studio Project worth 60 Credits.

In this module our animation students and VFX students combine forces to produce a short visual effects film, learning how to produce animation within the VFX pipeline. You can see the film below.

“Slushy” was filmed on location in West Horndon, Essex, courtesy of the family of third year Escape Studios games student George Morris, who kindly let us film for a day.

VFX Pipeline
The 3D Pipeline was overseen by 3D Lead Jamie Stokes, with a close collaboration between the animation and 2D departments to ensure the smooth sharing of scenes and assets.

Jamie created the character fluid FX, character shaders, lighting and rendering, along with asset creation, and the matchmove for all the shots.

To see more about “Slushy”, follow this link to Jamie Stoke’s official webpage.

Slushy has won many festival awards:

“Slushy” at IMDB
To see “Slushy” at the IMDB, follow this link.
The Escape Studios VFX Blog offers a personal view on the art of visual effects. To find out more about our new BA/MArt, now recruiting for September 2022, follow this link.   To apply, visit the official page here.